Order of the Holy Squirrel

The sound of the hoard thundered round the walls of the stadium , from the moment the winning touchdown that assured victory was scored the fans and squirrels alike had not stopped dancing, singing and hugging each other in rapturous embrace. The Order of the Holy Squirrel had Won the Bloodwieser Bowl .

Sir Andy Von Cook leapt from the dugout pumping his fists in the air as the fans raced onto the pitch to hoist their team on to their shoulders.

Season 10 in the pro’s had started with such hope and as the season progressed the Holy Squirrels defeated Dead Metal to top their division only to be knocked off their perch by the Slaan Seers and then they fell at the last hurdle to All Wight on the Night and failed to qualify for the Pro Playoffs.

But they did then qualify for the Bloodwieser Bowl, and nothing was going to stop then lifting the Cup, not even the mighty  Rodentia Ad Nauseam.

In very short order Tipsy McStagger stood tall in the centre of the stage, his Bloodwieser Babes forming a semi circle behind him, he called forth the Holy Squirrel’s Coach and his team to collect their prize.

Making his way through the crowd Sir Andy’s name was chanted from every corner of the stadium and as he planted his feet on the stage he turned to his people and shouted ” GLORY IN THE NAME OF THE HOLY SQUIRREL ! ”

“GLORY ” came the reply from every mouth in a sound that split the sky.

“Cheers ” McStagger passes the Bloodwieser trophy filled with the deliciously cool, crisp, refreshing brew Bloodwieser to Sir Andy. The Squirrels coach takes the giant trophy/tankard and rises it high fall all to see then downs the lot !!

The rest of that day and evenings events passed in a blur of drinking, dancing , singing , fighting, more drinking, dancing with Bloodwieser babes, drinking , fighting , drinking , seeing who belch the loudest which then was celebrated with more drinking , dancing again but this time with your hands instead of your feet , bit more drinking, who could head but the most people before falling down…. drinking…..goblin tossing with the prize being another drink .. then the kebab cart turned up and most people sat around discussing how much they hated their ex and how lonely the crushing reality of existence truly is but then the band started playing that famous bohemian song ” Place Your Hands ” by those legendary minstrels Reef and then everybody forgot what they were rambling on about and ran back inside.

The following day Sir Andy woke to his eyes being burned alive by the fiery rays of the sun and his head feeling as if it was split in twain by a battle axe. What had truly transpired that night would forever remain a mystery to him but what he really needed now was to crawl in a deep dark hole and die .Then suddenly a memory popped into his head, a memory of making merry with a gaggle of Bloodwieser babes and mystifying them with his tales of daring do and bravado . So successful was his manly manliness he remembered wooing the most beautiful maid of them all and he brought her back to his private chambers! and she was still there beside him !

Clearing his throat and taking a quick sip of last nights wine on his bed stand , Sir Andy turned to his new love to whisper sweet nothing into her ear only to find the most ugly , disgusting , Goblin babe staring back at him !

” Who’uth in the name of the Lady are you foul creature ?! pray what ar’st thou doing in my chambers?! Speak green devil who ist thou ?!   Demanded Sir Andy.

The Goblin babe let out a giggle that sounded like a snake coughing up gravel . ” Heh’ch hehe…… Your Wife my precious” Then it held out her hand to revile a diamond ring  , and huge sharp toothy grin spitting it’s pointy face . 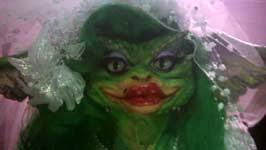 The terrible cry of pure anguish reverberated throughout the Stadium grounds , across the Kingdom of Parravon and the realm of Bretonnia itself . It could even be heard all the way to the All Seeing Eye, home of the Slaan Seers.

” What in the devil was that haughty cry I just heard?” spoke Jofro suddenly turning from his highback chair in his personal smoking lounge.

The lounge itself was filled with fine tapestries of romantic and epic fight scenes of Bloodbowl matches from days long past hung on deep wall of burgundy wood cut from the great trees of Loren, rich think carpet of elven hair covered the floor and a great fire place dominated the grand scene with which to toast his soul upon.

All of this with which to taste his fine liquors and wines and to receive his most important guests, Jofro jump round to determine where the sound had come from.

“I heard no such cry, must be your imagination dear boy, or that brandy is going to your head and affecting your senses “

” I’m not making it up, there was a cry I’m sure of it! ” Jofro pauses for but a moment , his ears trying to pick up but a whisper of sound as to hear the cry once more.

“Good grief old sport . I do believe you are losing your marbles ”

“Oh dear oh dear hahahaha. I do believe you have on the contrary lost your mind dear Jofro”

Jofro’s face turned a bright shade of red due to him forgetting his most important point he was making to his partner and his anger toward said partner pointing his foil out.

“Please , start again my fellow from the beginning” says TheStu holding out a fresh glass of Talabheim ruby Brandy to Jofro, a smile nestled on his face.

Jofro snatches the glass from his hand and takes a long gulp of the smooth liquor.

” As I was saying before I was interrupted my dear Stu,  Phase one is going most splendidly and soon Phase two of the Plan shall be set into motion ” a wicked grin spits Jofro’s face like an axe wound

“Remind me again of phase two? My head is rather worse for ware and I’m finding it hard to recall “ Stu says with a sight pain in his tone from over indulging the night before, his fingers slowly rubbing his temple.

” Well that’s tuff titties isn’t it ” Replies Jofro in a huff. ” If you go out drinking with those Filthy Squirrels in their Filthy Squirrel stadium then more the fool you! ” Jofro stamps an exclamation point on the end of his out burst by spiting on the floor .

“That is phase one  of the Plan is it not?” TheStu pointing to the opposite wall were Jofro had in big bold colourful writing put his grand Plan for anyone who came into his study to see. Much to the annoyance of Stu , but Jofro had assured him no eyes other than theirs would lay eyes upon it.

” I wanted the Holy Squirrels on team Jofro ” came his reply ” I’m ten times more charming than you AND I’m a much better dresser AND I won second place in that beauty contest remember?”

Stu shakes his head in amusement , thinking to himself it unwise to indulge his partner and start another one of their famous slagging off matches.  He instead casts his eyes upon the Grand Plan written on the wall a subtly as an Orc with a etch-a-sketch .

PHASE ONE :  Divide the MML using a combination of skill and guile into two opposing sides , Team Jofro and Team Stu.

“So are you going to divulge Phase two of the Grand Plan to me good sir ?”Inquires Stu

“For the love of Nuffle dear Stu must you constantly badger we with inert questions ?” Jofro asks ” It’s so simple in its design it’s fool proof ! Phase One we divide the MML, and Phase Three profit ! This scheme shall be my most Glorious Triumph” says Jofro unable to hide the smug pride in his tone .

“Yes I do fully understand phase one and three , but what of phase two? it remains blank on your not so subtle wall decoration Jofro and one would like you to indulge me? “

Jofro sat in his arm chair staring into space trying to cobble together a reasonable response. ” Well…..phase…..two…is….um……….oh  my gracious we’re out of booze !”  Jofro leaps out of his chair and downs the last of his drink and snatches up a small bell resting on the table next to his chair a rings it frantically ” GRIMLOCK ! GET YOUR SCALEY ARSE IN HERE !”  bellows Jofro

A few seconds later a rather miserable Grimlock enters the room with a small bowtie wrapped round his neck and grunts to acknowledge his boss.

” Run down to the cellar and fetch a bottle of Zanzibar Gold would you ” orders Jofro .

Just as the grumpy Saurus turned to his soul crushing task The Stu stops him. ” No need to trouble yourself my scaly friend, I shall fetch the drink. Knowing you’re most likely to bring back a bottle of that goblin piss your master normally serves most of his guests.” Stu shooting Jofro a raised eyebrow and questioning gaze .

“Just down the corridor second on the right is it not? I’ll be back in a tick ” Says Stu as he makes to leave the lavish room.

“I hate you !” shouts Jofro after him

TheStu stops in the door way and looks back at Jofro, a warm smile on his face and then he shoots him a playful wink.

MML Around the World

All donations go towards supporting the website expenses, and funding prize pools.